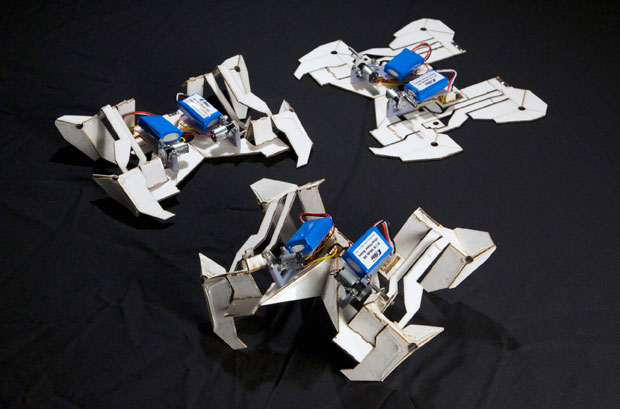 At the IEEE International Conference on Robotics and Automation (ICRA) last year, Harvard’s Sam Felton introduced us to his printed, self-folding inchworm robot. With some external infrastructure and the addition of a motor, the inchworm could autonomously transform from a flat sheet to a crawling robot by folding itself into a 3D structure with flexible joints.

Today, Felton and colleagues from Harvard and MIT are publishing a new paper in Science featuring a much more complex self-folding robot that can go from flat to folded and walking in four minutes without any human intervention at all.

Let’s be clear about what’s autonomous here, and what’s not: the folding process by which the robot changes from flat to less flat is completely autonomous, and this includes the ability to begin walking on its own, as shown in the video above.

But the layered structure of the robot takes a lot of work to prepare (printing, bonding, laser cutting, and so on), and the motors, batteries, and some electronic components all need to be installed by hand—a series of steps that take almost 2 hours:

That’s a very long and complex process [see illustration below], but what’s most relevant is to think about how much of it can be made autonomous. The researchers say that “the assembly time could be substantially reduced and completely automated with the use of pick-and-place electrical component assembly machines and automated adhesive dispensers.” And if that’s the case, we’re looking at potentially very cheap, easily mass-produceable robots.

The secret sauce that allows this robot to structure itself from a flat piece of cardboard is a very carefully computed folding design, combined with a structure comprised of resistive circuits embedded in a flexible PCB between layers of paper and heat-activated shape-memory polymer (the “PSPS” in the above image). This sandwich is laser cut where the joints will be, and when the embedded resistors heat up, the shape-memory polymer around them contracts.

Depending on where and how the cuts are made, this contraction can result in permanent (when cooled) controlled bending of up to 120 degrees in either direction. Flexible joints (like hinges) come from cutting out both the paper and the PSPS, leaving just the flexible circuit board to connect two structural elements. And by combining flat elements, rigid bends, and flexible joints, you can create complex linkages that can translate (say) the rotary motion from a motor into the cyclical motion of a set of legs. (DASH is an excellent example of this.)

The really hard part here is the design of the origami structure (which is done by a computer program) and the manufacturing of the composite sheet. Once the composite is completed, the final assembly step just involves attaching the batteries, motors, and microcontroller to the robot using a 3D printed motor mount and some screws. Still, arriving at the right design required over 40 iterations of the robot’s structure.

The microcontroller took care of sending current through the series of embedded resistive traces at the right time, to ensure that the folding process took place in the correct order. A particularly clever bit is how the motors attach to the structure of the robot, using tabs that sequentially fold to align the motor and then lock it into place [right].

Overall, creating a structural fold using this technique had a success rate of about 97 percent. The researchers tried to make three robots, and were successful with just one, but that was due to one single hinge not folding with the necessary precision on each of the failures. The robot itself can walk at 5.4 centimeters per second (0.43 body lengths per second) and turn at about 320 degrees per second.

In a very general sense, robots are made of common elements. This paper is demonstrating the autonomous (or potentially autonomous) printing and construction (through folding) of the following:

Here’s what, in this case, had to be manufactured and placed separately:

In other words, these things are what’s keeping this robot from being created and assembled to the point of functionality from just raw materials in a printer. Let’s take a look at where we are with this stuff.

The paper also described a printed velocity sensor. It’s possible to print other electronic components (with screen printing techniques), including LEDs, capacitors, and resistors, although printing a microcontroller might still be a bit tricky.

The motors used on this particular robot don’t lend themselves to be printed or assembled from basic parts, but other kinds of actuators do. One option might be to use shape-memory alloy (SMA) wiring, which shrinks when heated and expands when cooled. The problem with SMAs is that while they contract quickly, it takes a while for them to passively cool, so robots that rely on them tend to be sloooooowwwwww.

A faster way to go is to use compressed air, as with these actuators made of folded elastomer and paper: They can exert forces of 100 times their own weight, and inflate at something close to the speed of sound. You can work inflation constraints into the design, and the actuators will then curve, twist, contract, or do all of those things at once. By opposing two of these actuators, you could create a rapid back-and-forth motion, which could be used to drive a walking robot.

Another, similar design (also presented at ICRA 2014) are printable “pouch motors” from MIT:

Both of these inflatable actuators still need some kind of pump or a source of high-pressure gas, which brings us to:

Autonomous robots need autonomous power. Printable batteries and supercapacitors have been trying to be a thing for a very, very long time, driven by every single industry that wants cheap, thin, flexible power. The advantage that robots have here is that they can just sit back and wait for consumer tech to evolve, and sooner or later, we’ll have a printable battery that works.

In the mean time, there are a few ways that we might be able to power actuators without having to rely on electricity. One particularly awesome way is to use a gas generator, or better yet, a series of small gas generators. This is probably something that could be pre-mixed and printed, and then activated with an embedded resistor. We’ve seen this applied to explosively jumping microrobots, although for actuation, it might be better to use a mixture that’s slightly less, you know, violent:

We’re not there yet, but it’s something that we can see being a possibility in the near future, and it’s very exciting to think about in terms of everything from low-cost robotic toys to resilient robot swarms for planetary exploration.