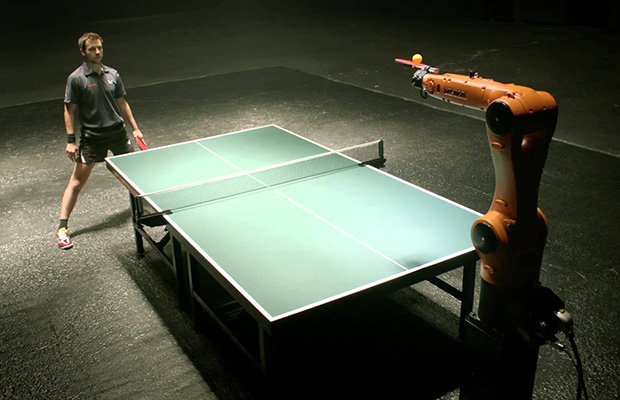 Really, Kuka? You ot us all excited for this match between one of your cool new robots and a world champion table tennis player. We were thinking to ourselves, “Wow, Kuka wouldn’t have set this whole thing up unless it was actually going to be a good match! Maybe we’ll see some amazing feats of high speed robot arms, vision systems, and motion tracking!”But no. Looks like there wasn’t really a match at all. Kuka’s robot (which the company says is the “fastest robot on earth”) did seem capable of performing some ping pong moves, and world champion Timo Boll did seem to have exchanged some shots with the machine. But the encounter wasn’t the “robot vs. human duel” we were promised. What Kuka gave us instead is an overproduced, highly edited commercial that, in our view, will puzzle (rather than amaze) those of us who follow robotics technology closely. Is this real, or is this hype? See for yourself.

But can it really return shots from Timo Boll? And if the answer is yes, how does it do that? Watching the video, I don’t see any kind of high-speed camera or motion tracking system. A ping pong ball is very small, and Timo Boll can hit it pretty damn fast. And the ball is also spinning. In order to hit one of these incoming ping pong balls, you have to have a very accurate idea of where it’s going to be when it gets within range of your robot, not to mention all of the other planning you have to do to figure out exactly how to swing the robot arm to return the ball where you want it to go, never mind just intersecting it. Were the camera systems removed from the film in post-production? And what about the ending with Timo Ball exchanging shots with multiple robots: Is there anything real in that scene or is it all special effects?

The “Making Of” video (which you can watch here) is equally disappointing and doesn’t provide any behind-the-scenes details on how the robot works.

So, do we have the technology to build a robot that can play ping pong? We definitely think so. Take, for example, tracking high speed balls. The video below (from the Ishikawa Komuro Lab in Japan) shows the kind of capability I was expecting to see in the Kuka ping pong robot:

This system (which is four or five years old at this point) is using a much larger ball in a much more constrained environment, not to mention a custom high-speed vision chip. It’s safe to assume that you might be able to do something similar with more standard hardware, but you’re still going to need some cameras somewhere, and if they’re not tracking cameras, and they’re not up close, you’re going to need a bunch of them to get the sort of accuracy and precision that you need.

Here’s a real robot (or two) playing ping pong, from Zhejiang University in China in 2011:

You can see the tracking cameras up near the ceiling. They’re not very big, but they’re there. Also, it sort of looks like the robot needs to have the ball land in the region between the dots in order to properly return it.

Here’s another example, from Katharina Muelling and Jan Peters at TU Darmstadt in 2012:

And one more from MIT, while we’re at it. This was posted about a year ago (note what appears to be a Kinect sensor above the table):

What these videos show is that over the past several years, it’s been entirely possible to develop robots that can reliably play ping pong against humans who are not Timo Boll, and who are being nice about it. It’s not a huge stretch of the imagination, then, to imagine that Kuka wanted to up the ante and actually build a competitive ping pong robot. The technology is close enough to being there that we were all suckered right in. And I mean, it’s Kuka. Trust us, we love their robots.

I guess we just have to accept that the company was primarily interested in a marketing campaign, not a real technological demonstration (although IBM showed that it is possible to combine the two with its Deep Blue vs. Kasparov matches and Jeopardy!-playing Watson AI challenge). My problem with this is that Kuka could have done something amazing here. They didn’t have to have a robot that was able to score six points (or whatever it was) on Timo Boll: they could have actually put some effort into just making a robot that could give him a little bit of a game. Or even just some fun rallies with him. These things aren’t strictly impossible, and they would have been MUCH more impressive than what we saw, don’t you agree?