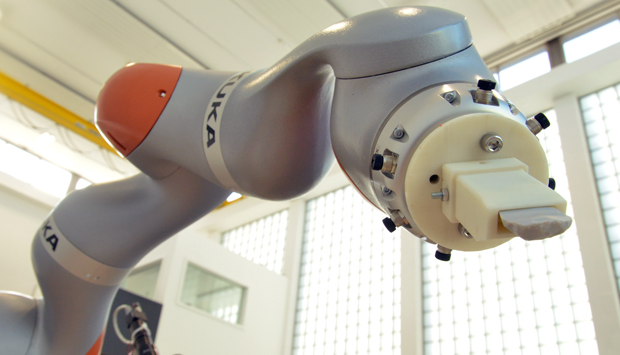 We usually associate robotics with tasks that are, if not high tech, at least modern in nature. That’s why it’s so cool to see a robot being adapted for a task that is explicitly ancient: scraping away at animal skins with replicas of stone tools found at archaeological sites.

Radu Iovita, an archaeologist at the Monrepos Research Center in Neuwied, Germany, studies microscopic wear patterns on ancient stone tools to try to determine how they were used. The conventional way to do this wear analysis is to make a fresh copy of the stone tool that you’re looking at, and then scrape a bunch of animal hides with it using the technique that you’ve guessed was used on the original. If, after a while, your new stone tool shows the same sort of wear pattern that the old stone tool does, you can have some level of confidence that you’ve been using the same technique. If the wear pattern is different, you make a new tool and try again.

This, to put it mildly, can take a while, and Iovita wanted to find a way to standardize and expedite the process. And so, robots. Iovita enlisted the help of professor Jonas Buchli at ETH Zurich, who conscripted a Kuka lightweight robot arm to precisely scrape tools against animal hides over and over, and after every 50th scrape, put the edge of the tool under a microscope to record the wear patterns. This video is decidedly in German, but it does show how the robot works (at 1:40):

The hope is that eventually, a fleet of robots will be able to develop a massive database of tools anywhere from 50,000 to 3 million years old that correlates different types of tools, techniques, wear patterns, and usage characteristics. But according to an article about Iovita’s work, not everyone is ready to embrace robotic archaeology:

Currently, Iovita is experiencing some opposition from within his own profession. Some believe that manual experiments are closer to the past reality; others find that use-wear analysis in general does not advance archaeological theory. Iovita thinks this is mainly due to the fact that most archaeologists have a humanities background and are not familiar with the world of engineers.

And as to the first point, it raises the question of what “manual” really means. According to my girlfriend’s 15-pound Compact Edition of the Oxford English Dictionary (which can only be read with a magnifying glass), “manual” means “done or performed with the hands.” The first recorded definition, however, is from a 1406 poem called La Male Regle, which is slightly before the introduction of Kuka’s lightweight robotic arms. So, it seems likely that Thomas Hoccleve (this dude) neglected to consider them when he wrote La Male Regle. We can forgive him for that, I guess.

“Manual” also means “as opposed to automatic,” and if you put these two definitions together, it’s pretty clear that manual experiments aren’t supposed be compatible with things like robots, but in my opinion, this perspective is as outdated as La Male Regle. What this robot is doing is manual, as far as the stone and leather are concerned, since it’s precisely replicating the motions and forces generated by a human hand. The fact that it isn’t a human hand doesn’t, in practice, matter, since any characteristic of a human hand can be programmed into the robot.

What’s particularly interesting to me about applications like these is how it potentially changes the meaning of the word “handmade.” Like, if you have a robot mimicking the motions of a human hand to complete a task or create an object such that if you performed a sort of Turing Test and couldn’t tell a robotic result from a human result, would you then be forced to call objects created by robots “handmade?”

For example, take that robot chef from last Friday that can exactly duplicate the motions of a human chef to create a nearly identical copy of a crab bisque. Is the crab bisque made by the robot any less “handmade” than the one made by the human chef? I suppose you could argue that handmade instead should refer to something that is “unique,” but it would be trivial to incorporate some minor elements of randomness into the programming of a robot to duplicate that process, whether it’s for scraping tools against leather or preparing soup.

Anyway, as far as the archaeological stuff, the researchers are confident that within a decade, robotic experimentation like this will become the standard. We’re pretty sure they’re right.