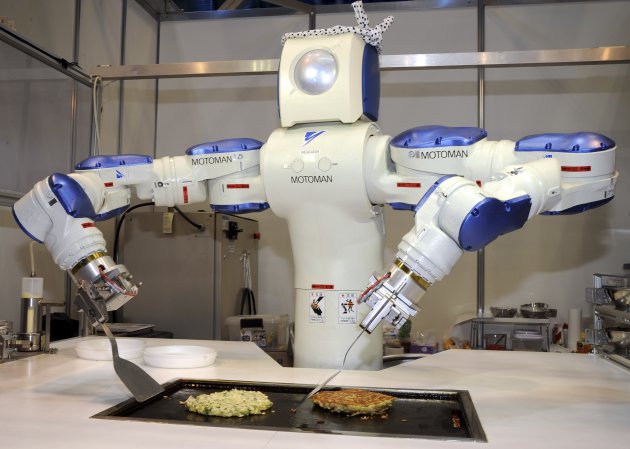 RoboEarth. No, it’s not a lame SNES game from 1994, it’s a cloud network that lets robots learn from the actions of other bots. It started over three years ago, and now, a new, related project has sprung from that initiative at the Institute for Artificial Intelligence at the University of Bremen in Germany. Called RoboHow, it seeks to translate info on the web meant for human consumption into something our electromechanical helpers can understand. Imagine a future in which you ask your house robot to whip you up something new for dinner; RoboHow would ingest your chosen recipes from Epicurious and turn them into instructions said bot can execute.

Of course, that means more than just turning English into bot-friendly 1’s and 0’s. RoboHow has to make explicit many parts of complex procedures that humans can simply infer — like how to turn on an oven, or where to find needed ingredients. The plan is to eventually enable robots to search the internet for info or instructions they need to complete assigned tasks without external (read: human) intervention. For now, people have to identify, demonstrate and feed RoboHow the right data, as bots left to their own devices would inevitably grab bad or incomplete information. So, it seems that our future robot overlords still need us meatbags around… for a little while longer, at least.