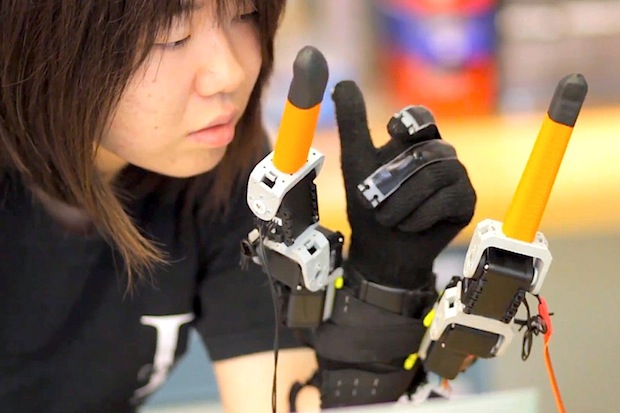 Humans are tired of being constrained to the number of limbs and digits that we were genetically coded for, which is why we were so excited to hear about the pending availability of that extra pair of robotic arms we’ve always wanted.

But there’s absolutely no reason that we should stop at arms. We want extra everything, because more is always always always better, and an extra pair of robotic fingers is definitely something that we’ve always wanted. Why? Because with seven fingers on each hand, we have the potential to be 40 percent more efficient at typing, and you would get seven articles on robots per week instead of the usual five!

The MIT researchers who came up with these “supernumerary robotic fingers” didn’t have increased typing speed in mind as the very first application for their human enhancement system. Instead, the fingers are designed to enhance grasping motions, allowing you to do with one hand what you’d otherwise have to do with two hands:

It’s tempting to look at this system and think, “I’m so lazy that I could really use some extra fingers,” but for some people, one hand is all they’ve got. The fingers are apparently very easy to use, since they’re controlled by the movements of your biological fingers, relying on sensor inputs to make an assistive grasping motion whenever they sense you trying to do the same.

The servos driving the fingers are powerful enough to exert a force similar to your own fingers, meaning that they can do more than stabilize objects: they can actually help you hold and lift.

What the robotic fingers are currently lacking is any kind of tactile sensing, or any force feedback, which are both key to the operation of the fingers you currently have. The next generation of the system will likely include these capabilities, and it’s interesting to think about what other capabilities might be available. For example, you could swap out the robotic fingertips for gecko adhesive, or set up each finger to be able to rotate 360 degrees. Or what about cranking the speed of the fingers way, way up?

It’s nice to hear that in addition to the extra sensors, the researchers (from Harry Asada’s lab, the same place that is working on the supernumerary robotic arms) already have an eye towards usability:

“This is a prototype, but we can shrink it down to one-third its size, and make it foldable,” Asada says. “We could make this into a watch or a bracelet where the fingers pop up, and when the job is done, they come back into the watch. Wearable robots are a way to bring the robot closer to our daily life.”

How awesome would that be?

And you know, maybe one day, we’ll have the technology to take these robotic arms and robotic fingers and remove the human from the loop entirely, creating some sort of robotic arm with robotic fingers on it that doesn’t rely on being attached to a human to perform tasks. That would be awesome, too.

“Bio-Artiﬁcial Synergies for Grasp Posture Control of Supernumerary Robotic Fingers,” by Faye Wu and Harry Asada, both from MIT, was presented last week at RSS 2014 in Berkeley, Calif.