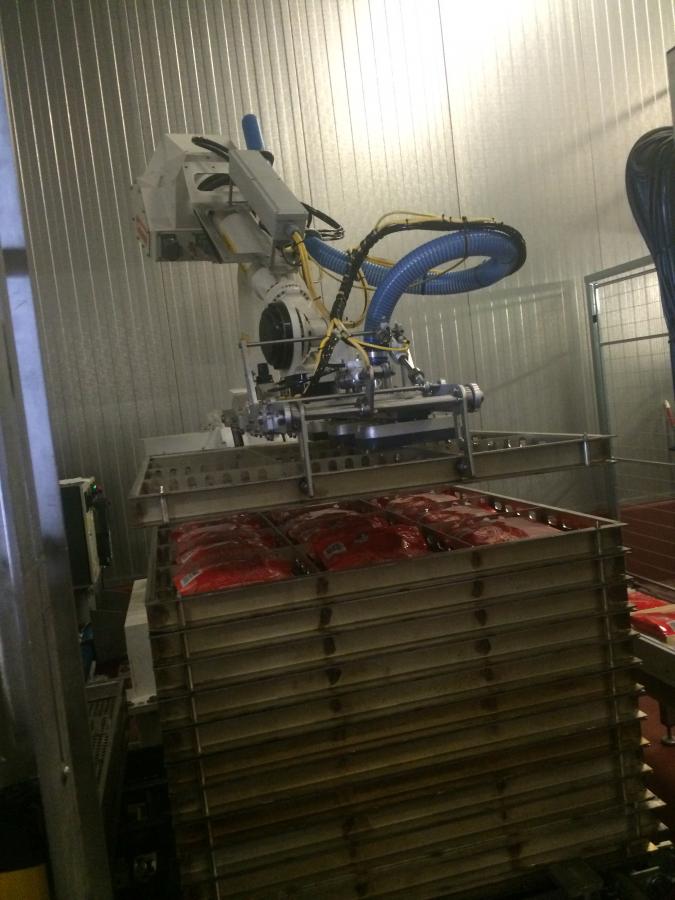 Bell Carter Foods, Inc., based in Lafayette, CA, is a fourth-generation, family-owned company that has been in operation for more than 100 years, producing table olives for retail and foodservice sale. The company operates two production facilities in Corning, CA, operating six lines that package whole and sliced olives in cans, jars, cups, and pouches. Until it installed its first robot in late 2013, Bell Carter relied on manual operations and conventional technology for processes such as tray loading, case packing, and palletizing.

“Our plant was not very automated,” says Bob Asmus, Project Engineer for the company. “We were very much a manual operation, and we knew we needed some automation.”

Its first foray into robotics involved installation of a robotic retort tray loader from Pearson Packaging Systems for an existing pouching line. The line packages sliced black olives in 33-oz flexible lay-flat pouches for club-store and foodservice sales. Before Bell Carter added automation, the bags were manually loaded into stainless-steel trays, each holding 12 pouches. Once 12 trays were filled, the stack would be loaded into the retort system.

According to Asmus, the drawbacks of manual loading included the amount of labor required and the speed of loading. “With the manual system, we couldn’t run the pouch machine at its full capability,” he says. “We could have added more people, but it was a rather confined area. Seventeen pouches per minute was all we could do in the best environment.”

Having no experience with robots, one of Bell Carter’s concerns was the perceived complexity of robotic systems and how quickly operators used to a manual system would be able to adapt. But Asmus says that “the operators took right to it and are doing a fantastic job,” due to training and support from Pearson. “Their method of bringing the production staff into the robotic world was very good,” he adds. “They answered questions, and they were there for us.”

The Pearson system, employing a FANUC M-710iC/70™ medium-payload intelligent robot, was installed in November 2013. During operation, as pouches come off the filling system, the robot picks up three at a time with a vacuum end-of-arm tool (EOAT) and places them into the tray. If a pouch is not positioned on the conveyor correctly—an issue that Asmus says is rare but can happen—the robot will not pick it up, and the pouch will convey to a catch bin. Once a tray is filled, the robot picks up an empty tray from a stack and puts it on top of the stack of filled trays. When the stack is complete, the system automatically discharges it for retort cooking and transfers an empty stack into the tray-filling area, “so that you don’t have to stop your pouching operation at all while this operation is going on,” explains Asmus.

The system is equipped to operate at 25 pouches/min, but Asmus says Bell Carter is currently running the system at 22/min. The robot has also been designed to handle product from two lines in the event that Bell Carter adds a second pouching machine to the line.

Since installation of the robot, Asmus says Bell Carter has realized several benefits versus manual loading. “So far we have improved productivity, which has allowed us to redeploy operators to make other areas of our operation run more efficiently,” he says. “The automation has also lowered our cost, and our efficiency is about 24-percent to 25-percent better than it was.”

Bell Carter is so impressed by the results of adding automation to its line that it has ordered nine more robots for its operation. At presstime, three are scheduled for installation in summer 2014 to handle trays after the pouches exit the retort system, and six will be added in December 2014 to depalletize cans and palletize cases. “In a short two-and-a-half-year period, we will have gone from no robots to ten,” says Asmus. “This experience really changed our mindset regarding automation. Once we got over the newness and the training curve, there were no two ways about it. This was definitely the way to go.”

See a video of the robot at Bell Carter Foods.

This article is part of the August 2014 Robotics & Automation Special Report. See the full story.