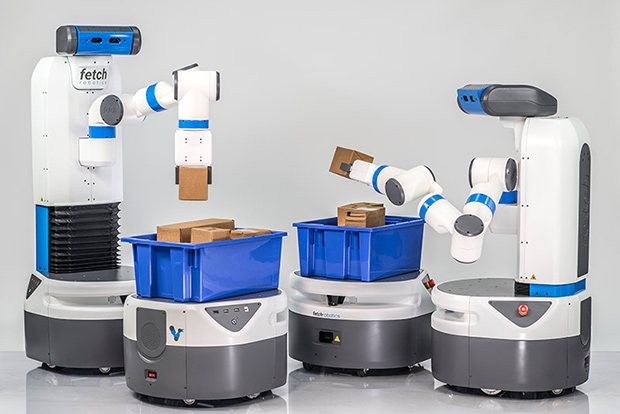 As of just a few months ago, all we knew about Fetch Robotics was that the core team from Unbounded Robotics, all of whom had been at Willow Garage before that, were working on not just one but two brand new robots designed to tackle the logistics market. Today, Fetch Robotics is announcing Fetch and Freight, a beefy mobile manipulator and zippy mobile base designed to automate logistics in places like warehouses. We have all the details, exclusive video of the robots in action, and an in-depth interview with Fetch Robotics CEO Melonee Wise about why these robots are exactly what companies like Amazon and Google desperately need.

Fetch and Freight are designed to do fulfillment in warehouse environments. Companies like Amazon have enormous warehouses full of shelves of stuff, and when you order said stuff, someone has to go get that stuff off of whatever shelf (or shelves) that it’s on, put it into a bin, and then send it all off to get packed up for shipping. This can be a miserable experience for the humans who work at it, who end up walking from one end of the warehouse to the other, hauling carts of whatever it is that you desperately need to have at your doorstep in two days or less.

Amazon, of course, has its own private fleet of robots that can bring shelves to people, but using these robots (from Kiva Systems) requires reconfiguring the warehouse with special shelving and adding other infrastructure. And even with this robotic warehouse, workers still need to manually pick the stuff off the shelves, which is probably why Amazon is trying to figure out how to do picking with robots. And Amazon isn’t the only company that needs this technology: Google Express, eBay Now, and all sorts of other e-commerce companies that depend on warehouses to get customers their goods as fast as possible all need robots, even if they don’t know it yet.

However, designing robots for environments like this has proven to be tricky. Warehouses are structured environments, which helps, but you’ve still got an enormous amount of variability in products to be picked, long distances to traverse, aggressive uptime requirements, humans to avoid accidentally murderizing, and on top of it all, robots have to be either more cost effective than people, or they have to augment an existing human workforce to make them more efficient. If your robot can’t unambiguously pull all of this off, it’s not going to make it in a warehouse, and Fetch Robotics thinks that their two-robot solution has what it takes.

“In the process of designing Fetch, we had to narrow down to an application, and then we did the need-finding necessary to build a robot that had the right specifications for the application that we were going into,” explains Fetch Robotics CEO Melonee Wise. “The reason we’re doing two robots is because one of the big challenges in logistics is traversal of the warehouse. A mobile manipulator just can’t move as fast because it has a high center of gravity, and so we need a smaller, faster robot to zip around the warehouse and get stuff done. Because at some point, we have to be as fast as people, or faster.”

Fetch Robotics’ system uses a relatively large and capable mobile manipulator (Fetch) to pick items off of warehouse shelves, while Freight, a mobile base, acts as an autonomous cargo delivery cart. Fetch can pick items continuously, while a succession of Freights can switch in and out to move different selections of goods to different parts of the fulfillment center. Here’s a demo:

Freight can also be used by itself, following human pickers around a warehouse (using no beacons, only vision), meaning that they don’t have to push carts around and also that they don’t have to keep going back and forth to deliver items that they pick. Instead, they can pick continuously, relying on multiple Freight robots to make deliveries. Fetch Robotics calls this system “Follow Pick”:

Honestly, we’re not sure why this Follow Pick system isn’t already a thing, since it seems to make so much sense, providing tangible and immediate benefits to both workers and the companies that employ them. What seems likely is that safe and robust autonomous navigation has just not ever come together in a robot that’s cost-effective enough to be used in this context, but that’s one of the key differentiators with both Fetch and Freight: they’re (relatively) affordable. Let’s start with Fetch, the mobile manipulator. The centerpiece is the back-drivable 7 DOF arm, which is capable of lifting 6 kilograms. According to Fetch, this is a large enough payload to handle the vast majority (90-95 percent) of all items in a typical warehouse. Despite the large payload, Wise says that it’s still low power enough to be safe for humans to work around, and the robot’s software includes the ability to detect any collisions and stop the arm immediately.

Between the arm and the telescoping spine, Fetch has a grasping range all the way from the floor up to just under two meters, which can cover approximately the same manipulation range as a human. The gripper is modular with an ISO standard interface, and includes a dedicated Ethernet connection so that you can swap it out for something that includes a camera for up-close vision, or any other sensor you’d find useful.

While Fetch Robotics wouldn’t tell us how fast Fetch is at picking right now, they would say that their goal (which they seem confident is achievable) is to get Fetch operating “as fast as” a human picker. Fetch has a PrimeSense 3D sensor in its head, which can pan and tilt. There are a bunch of mounting points up there for additional sensors, too. Fetch’s base includes a charging dock, a 25-meter range navigation and obstacle avoidance laser from SICK, and differential drive. Freight is what you’d get if you took a chainsaw to Fetch at the waist, pretty much. It’s got the same differential drive and 25-meter range laser, which it can use to detect people and follow them around. As Wise commented earlier, the big advantage that Freight has over Fetch is speed: right now, it can comfortably hit 2 meters per second, although it’s possible to crank it up to 3 m/s. That’s jogging speed, and a not entirely comfortable jogging speed, either. It’s fast.

On top, Freight has a multitude of mounting points, so that if you want, you can put shelves on it, or whatever specific cargo transport system works best in your warehouse. Freight is comfortable handling 70 kg; it can actually handle more, if you’re willing to crank the speed down a little bit. Because, you know, momentum. Both robots can recharge themselves autonomously, and they share a common dock. The dock is designed with a very distinctive shape to help the bots locate it with their lasers, and the dock connector is particularly clever, with some built-in wigglyness. The docks can charge the robots in 20-minute bursts to maximize uptime. During less frantic moments, the docks will also do 3-hour deep cycle charges to help maintain battery longevity.

From batteries to actuators, Fetch is designing both of these robots for work, not for research. They’re built to be durable. Wise says that the baseline minimum lifetime of the robots is about 13,000 hours in worst case usage, which would be asking the arm to constantly wave around a 6 kg payload. In more typical usage, Fetch is expected to be able to work 16 hours a day, 365 days a year, for four years before something breaks on it. Freight, not having a manipulator on it, should last even longer. Along with the robots themselves, Fetch Robotics will also be providing high-level control software that can handle lots of different robots all at once, and integrate into existing warehouse fulfillment systems. Out of the box, the Fetch Robotics system will be able to handle mapmaking, semantic labeling, power management, and dynamic task allocation. All of this is, of course, based on ROS.

The Cost and Competition

The big question that we had at this point, and that you probably have as well, is how much these robots are going to cost. We wish we had a definitive answer for you. The problem, Wise told us, is that in a warehouse implementation, you’ll need to invest in a software and hardware system consisting of multiple robots, so a per-robot pricetag wouldn’t necessarily be appropriate. However, we did manage to pin down a few things about cost: Wise did tell us that Fetch would cost “less than $100,000” and that Freight is less than a third of the cost of Fetch. Even if we assume that Fetch costs close to $100,000, if you compare it to other mobile manipulators like Tiago and RB-1, Fetch would be remarkably inexpensive for what it is, with commercial-grade robustness, a 6 kg payload, and a 25-m laser.

We also heard that a research version of Fetch is in the works (hooray!) and we should be getting more details on that in the next few weeks.

As for Freight, it’s easier to make a comparison to other mobile bases, most notably Adept’s Lynx platform. We’re not sure how much Lynx costs, but we are almost certain that it’s more (perhaps way more) than $33,333.32, and Wise says that in terms of core capabilities, Freight and Lynx are “essentially very, very similar.” Wise seems confident that Fetch Robotics is going to be able to ship both of their robots in Q2 of this year, just like they promised back in February. We should reiterate how crazy this is considering that the company is only about eight months old, and they only finished putting together the first Fetch robot in March.

We’ll likely see Fetch and Freight initially deployed in pilot programs in real warehouses within the next few months, but the first look that the public will get at the robots will be the research versions at ICRA in Seattle next month. And as for what’s next, Fetch Robotics obviously has its grippers full trying to get two robots all set for commercial production. The company is currently at 13 employees (plus 5 summer interns) and trying to grow as fast as possible (they encourage you to apply here), but Wise was willing to give us a glimpse at what they’re thinking about for the future:

We envision the robot being able to learn new capabilities, like kitting, or other static tasks, like light assembly, but those are later down the road for the robots. We see the robot as a platform that we can put new capabilities on.