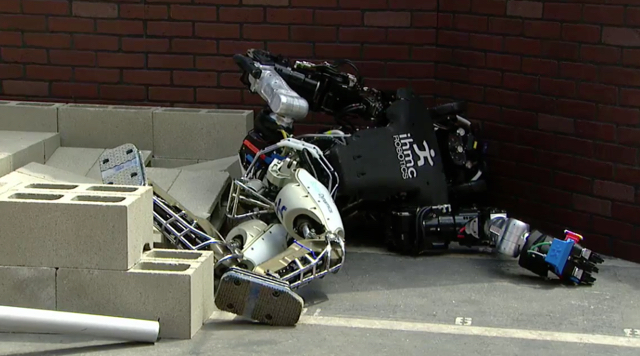 By Erico Guizzo and Evan Ackerman

On Thursday, the day before the competition was to officially start, DARPA allowed the teams to conduct a dress rehearsal, putting their robots through the course to see how they’d do. During that dry run, not many robots fell over, so we went into Day 1 of the Finals thinking that falls would be rare. They weren’t. Lots of robots fell over, and a bunch of robots fell over multiple times. As much as nobody wanted to see a robot fall, everybody wanted to see a robot fall, and the possibility of falls (and reality of falls) kept everyone watching on the edge of our seats.

The impressive thing about these falls is that, although they look pretty bad, the robots were just fine (well, most of them). After humans got them back on their feet and gave them a reboot, the machines were ready to run again. Team IHMC’s Atlas fell twice during their run and it still scored 7 points (of a maximum of 8). Team MIT’s Atlas had a bad stumble out of the vehicle and also went on to complete most of the course. So it’s a good thing that robots are falling at the DRC Finals—that’s how we’re going to make them better.

Still, yeah, it’s hard not to feel bad about these automatons. “It’s amazing how we anthropomorphize these things,” DARPA program manager Dr. Gill Pratt said yesterday at a media briefing. “It’s a pile of aluminum and copper wire and software. I don’t cheer for my laptop. But people cheer for these [robots]. And of course when it falls, we all feel terrible, ‘Uh, it got hurt.’ ”