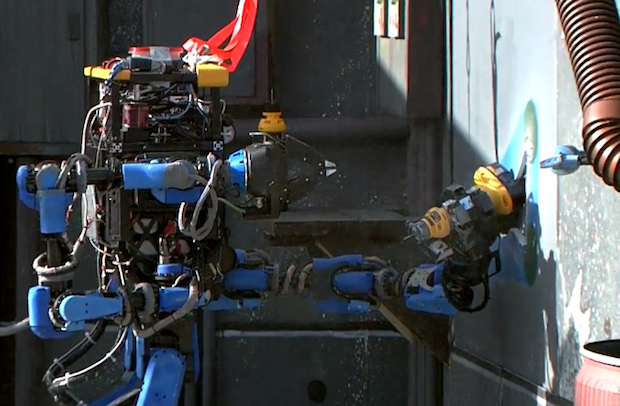 Robots are getting things done Quite frankly, this is an impressive thing to be able to say. Many robots are completing some parts of some challenges, and some robots are even completing many parts of many challenges. Nobody is doing anything quickly: even the most successful teams are using up at least half of their 30 minute time limit per challenge, and many teams are moving slowly enough that, while their progress through a task is good, they end up running out the clock. The point, though, is that success is happening consistently, and if there was some kind of major disaster tomorrow, these DRC robots could be tossed in there and maybe actually do some good.

So far, SCHAFT is the team to beat SCHAFT clearing a pile of debris.

At the end of day one, the score has Japanese team SCHAFT with 18 out of a possible 20 points after five events, which is alarmingly close to flawless. MIT is in second place with 12, and no other teams are in double digits yet. This is not entirely a surprise, since SCHAFT posted video of themselves completing every single task before the competition even started. It’s easy to tell that the practice has paid off, as SCHAFT has so far blown through ever task rapidly and confidently. They’ve got three more events to do tomorrow, and arguably, they’re the three hardest: ladder climbing, terrain navigation, and driving. SCHAFT was the only team to manage to screw the hose into the standpipe on Friday. It’s using its free arm and hand as a mobile vision system. Team IHMC killing it on the debris task.

Based on what we’d seen before the competition from some of the Track B and Track C teams, we were a little bit worried about whether the size and complexity of ATLAS was going to turn into a liability for the teams using the standard platform. Happily, that’s not the case, with ATLAS proving to be generally reliable, capable, and even quietish (although it does only operate while tethered to a generator). We were extremely impressed with Team IHMC’s terrain negotiation skills: they powered over the toughest part of the course with no slips and only minimal pauses for path planning. And just in case anything does go wrong, there’s a whole bunch of engineers from Boston Dynamics (plus an entire spare ATLAS) hanging around at a “robot hospital” ready to leap into action. While humanoid robots predominate at the DRC, several teams are using designs that are more novel, most notably JPL’s RoboSimian and CMU Tartan Rescue’s CHIMP. Both RoboSimian and CHIMP were very solid on the terrain tasks, which they tackled on all fours (and in CHIMP’s case, on tracks) instead of using two legs as most other robots. However, RoboSimian wasn’t able to compete in either the car driving or ladder climbing tasks (although they plan to next year), and CHIMP was only able to awkwardly climb up one rung of the ladder, having sacrificed any hope of being nimble to a clever but very heavy array of tracked climbs. We’ll be following both of these teams tomorrow to see how well they do in tasks relying more heavily on dexterous manipulation than on movement. CHIMP isn’t quite as nimble on ladders, although it did manage to score one point by barely lifting itself off of the ground.

Things are different outside Valkyrie working on the door task.

Even the teams that did get a lot of practice in had some trouble competing in the live challenge tasks. In particular, NASA JSC’s Valkyrie wasn’t having a good day. Partially, this is performance anxiety for both the humans and their bots, but also, being outside introduces a bunch of new variables that most teams haven’t had to deal with before. For example, depending on the time of day, there was a mix of bright sunlight and deep shadow across the task areas, and scattered clouds would intermittently and unpredictably crank the brightness and contrast way down. And it was windy, too, making balancing on the ladder and terrain tasks significantly more difficult. The wind also had a nasty habit of slamming doors closed on the door tasks, which is where SCHAFT lost out on the only two points that it missed all day. HUBO going backwards up the ladder.

The DRC robots are intended to take over from humans, but that doesn’t mean that they need to operate the way humans need to operate. For example, Team DRC HUBO reached almost the very top of the ladder task by going up with its back to the ladder. It’s perhaps not the most intuitive way to do it, but because of the way HUBO’s joints bend, going backwards enabled it to keep its center of mass closer to the ladder itself.

Not every robot is breaking MIT’s ATLAS preparing to drill into a wall.

Past experience with robots in general (and robotics competitions specifically) had us worried that most of the DRC robots would spend most of their time non-functional to some extent. There certainly have been technical problems, and some teams have had more than their fair share, but most robots have been behaving themselves most of the time! No matter how clever your robot is, it has to work reliably to accomplish anything, and we’ve been pleasantly surprised by how reliable the robots have in fact been. This bodes well for the operational future of disaster relief robots. HUBO recalibrates after someone accidentally bumped into an E-Stop.

As well as Friday went, we don’t want you to get the idea that the DRC is turning out to be easy, and there are still teams working towards their first point. Even the best teams have lots of room for improvement between now and the DRC Finals. The hardest task is turning out to be driving; even with teams being allowed to start the task with their robot in the vehicle already, nobody has so far been able to score a single point. Team DRC HUBO did manage to get the car to move, but they went over time doing it. Although over the time limit, HUBO was still able to successfully drive the vehicle.

On Saturday, the robots that performed the five manipulation tasks will move on to the vehicle, ladder, and debris tasks, and vice versa. At the end of the day, all the points will be tallied, and we should have final results for you after a press conference that’s been tentatively scheduled for 7 pm ET.